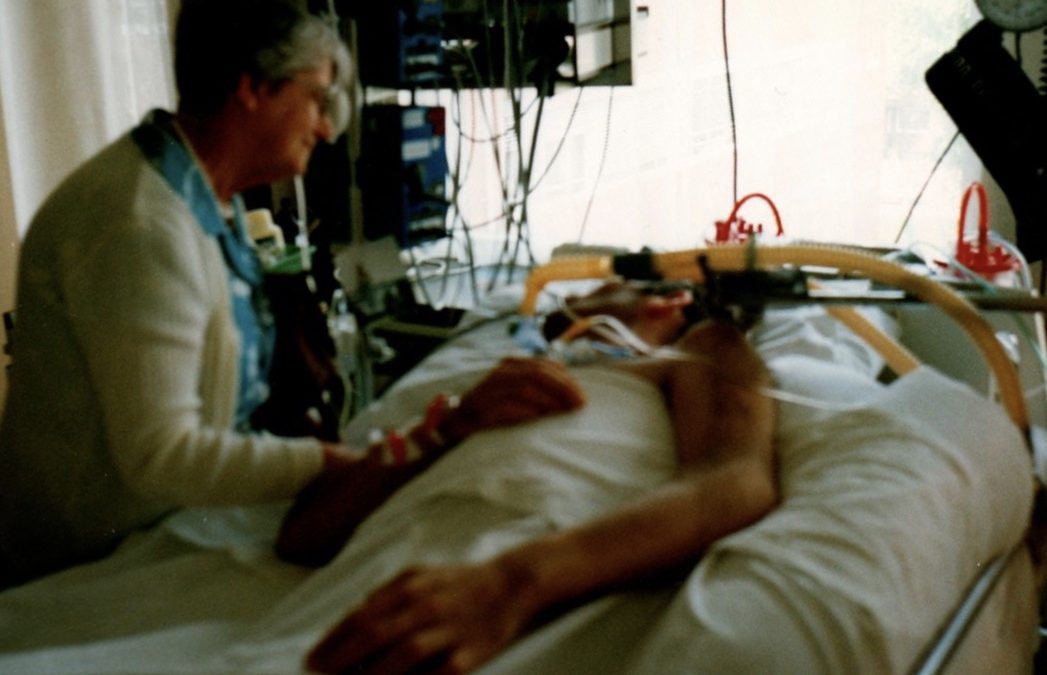 Psychological theory that ignores the wounding agent, that blames the victim by locating psychological disturbances solely within the cliënt, amount to an egregious empathic failure – and cannot help but re-traumatize those seeking psychological help.

About worries and hopes, about limitations and possibilities.

Last week I had a telephone conversation with colleague and former fellow student Ruud. Ruud is a retired general practitioner. Together we started the Psychosynthesis training at the Institute for Psychosynthesis in 1998. It was an interesting conversation about then, about now, about our concerns and about our expectations. But also about hope and about opportunities. We live in a time when we are all challenged to look back and see where we came from and perhaps have difficulty letting go of something and at the same time reflect on how things are now and how we relate now to what happens in our own lives and beyond. What should we let go and do differently and what can we hold on to and perhaps transform ourselves into something new that is better suited to what is needed now.

Psychosynthesis and the Personal Journey of Inner Growth and Awareness

Ruud knows me, because we have been able to follow each other intensively for a number of years in our personal psychosynthesis journey. Ruud saw how, a number of years after my hospitalization and rehabilitation, I was busy with reintegration into work and the struggle in my personal process in which I tried to find the balance between my limitations on the one hand and my options on the other. A process in which he supported me both personally and professionally (with his knowledge as a general practitioner). A process that eventually, after years of struggle with myself, with my work and the benefits agency UWV, led to complete incapacity for work and an increasing withdrawal from life itself. Fortunately I met the right people in the right places so that I could eventually work through my own process and my own trauma and I am now where I am at the moment. A long and laborious process in which I become increasingly aware of the enormous transformation that I have been able to go through.

Personal crisis in preparation for a professional learning path

And that is exactly what we came to in our conversation together. Looking back at what has happened, it seems like it has been a long preparation for where I am now. Where I am as a person and as a therapist in a society painfully affected by this pandemic. In recent weeks, I have been confronted with all the images and experiences of people who have become victims of the Covid-19 virus, end up in the intensive care unit and have to be ventilated. Stories of anxiety and depression. Keeping your distance and the desire to be close. Stories of loss of employment and income and loss of perspective. Loss of strength and loss of control. I see on a large scale what I have experienced and lived through on a small scale. Together with Ruud I have come to the conclusion that it is time to become visible as a therapist in the possibilities that I have to support others where possible in these difficult times. Do I have the answers? No …. but I had to live with the same questions and ended up living my own answer.

Over the past year and a half I have deepened more and more in psychotrauma. It invites me to become increasingly familiar with different trauma theories and understanding my own trauma experiences. I now dare say that I was able to survive and endure my traumatic experiences in the Intensive Care Unit because I was already traumatized and had become familiar with survival. That may sound a bit strange, but that’s how I really feel it. When you are exposed to a traumatic event, our personality and body respond to it with all kinds of strategies to ensure that we survive or cope with the event. One of those strategies is the inner split. A split that we can easily confuse with dissociation.

There is a difference between dissociation and inner split. Ruppert describes the inner split between the different parts as something that is permanently fixed in the identity and personality and a dissociation as a temporary strategy that comes but also goes again. Another form of split that you will recognize is the split between the lower body and the upper body. Between head and heart and stomach. So you could say that because of my familiarity with this inner split through previous trauma and my unconscious tendency to dissociate in ‘dangerous or unsafe situations’ in my life, I was able to go through this. and “survive” it. For example, I remember that during the period that I wanted to run, I was able to get rid of my pain in my feet and knees by literally loosening the attention from my physical complaints and therefore hardly feeling the complaints. Until at a certain point the body just stops, so walking just doesn’t work anymore. I was used to ignoring signals from my body.

Aspects of the personality are split off not because of basis conflicts among them or because of a necessary conflict between them and society, but because the environment is unwilling or unable to respond empathically to full human being. Good enough empathic respons from the environment will allow a sense of I-amness that can engage and manage the widest range of psychological experience, including the many natural polarities of the human personality: affection and anger, pain and pleasure, dependence and independence or contact and withdrawal, for example. Within an empathic holding environment, such dynamic polarities can be held as part of a larger whole, with no need to split them dualistically into completely separate sectors. While splitting is a defense, it does not depend primarily against inherently conflictual aspects of the inner world. Rather it defends primarily against the non empathic response of the environment.

What I especially want to bring to your attention in this blog article is that a traumatic event never stands alone and should be seen in therapy in a much broader context. Franz Ruppert talks in his Psychotrauma theory about the so-called “Trauma biography” that you have to map out. Most of the early trauma you experience as a human being is recorded as a kind of blueprint throughout your ‘system’. Body, emotions, feeling and thinking. When you end up in a stressful situation you can either fight or flee. In a trauma situation, that is not possible and the only possibility is to freeze and split off inwardly whereby the trauma part is separated from the healthy part and then maintained and separated from each other by the surviving parts. I also look at my personal traumatic experiences in intensive care and the subsequent recovery and rehabilitation period. When you manage to look at personal experiences from trauma theory, a different and much broader context arises in which meaning can be given to what happened and its influence on personality and personal life in work and relationships.

So when I had to go through the trauma of a life-threatening illness I could more or less fall back on subconscious survival strategies like the dissociation and inner split, which helped me live through trauma. I was lucky. I have recovered to a large extent physically and could more or less pick up the thread of life again. When I look back on it now, I see that I actually switched from one survival mode to the next survival mode. I had survived it alive but was not yet able to really allow life. I continued to survive because myself and also in the range of different therapies I was unable to heal the inner split. Many of the therapies I indulged in focused on learning to cope with the limitations and accept what I had lost but not what actually happened. The event could not be placed in a larger context such as the personal trauma biography.

In my early years when I was engaged in Psychosynthesis, Spirituality became another survival strategy to avoid actually facing my own injury and trauma biography. I fled into the world of the Spiritual as a kind of replacement for my old ‘religieus’ identity from which I derived my identity and autonomy in the past. But it was not mine. No autonomy of my own, no authenticity. I lived the answers of someone else. Since 2018, the symptoms and problems that can develop after a long-term admission to an intensive care unit have been officially recognized in the diagnosis Post Intensive Care Syndrome (PICS). To me, this diagnosis feels like an acknowledgment of the impact such admission can have. Effects that arise not only from the disease or treatment itself but also revive a personal trauma biography. I think it is important in the guidance of PICS that the experience should be seen in the perspective of the individual trauma biography.

It was only when I really understood the efficacy of psychotrauma in my personal life and became aware of the inner split resulting from early childhood trauma as a survival strategy for coping with life that I could begin the process of working through the own trauma biography. In an interview, Vivian Broughton mentions the need for attention to trauma in therapy and that we as therapists cannot free and heal someone else, but rather facilitate the process in which the other can free themselves. She says:

Empathy is not something we need to learn. When we free our healthy I from the entanglements of the trauma, a free and healthy self is created that is empathic in itself! ‘

A healthy I and a healthy I-Self relationship

We cannot heal trauma to our clients. What we can do is strengthen the healthy I so that there is room for the healing that is contained in it. As far as I am concerned, this ties in beautifully with where Psychosynthesis talks about a free and healthy I-Self relationship. When that relationship is free and we can detach ourselves from all those things that we have identified ourselves with, then life and light can flow freely through us and nourish us just as a plant feeds by connecting its roots with the earth and its leaves with the sun. It is life itself that heals us. All we can do is clear the way and free ourselves from what we are being held in. Psychosynthesis and trauma are intertwined by the therapist who delves into the height and the depth, in the personal and the trans-personal, in the inner world and the outer world, in the tangible and the invisible, in the large and in the small . In our own (family) system and the systems with which we are connected. In short … with life itself.

Together with Ruud, we also came to the conclusion in our telephone conversation that the current crisis that forces us to keep our distance and to work at home and online as much as possible also offers a whole new perspective on the offer of the practice for Psychosynthesis Amsterdam. I suddenly realize that my offer is no longer limited to the physical space of the practice on the Lijnbaansgracht in Amsterdam, but that the offer is accessible throughout the Netherlands and even beyond. That is why I will make myself more visible in the online offer as a Psychosynthesis & Trauma therapist in the coming period. There is an extra page on the website of the Practice for Psychosynthesis Amsterdam with more information about the Post Intensive Care Syndrome (PICS) and the relationship I make with Psychosynthesis & Trauma therapy and the therapy offered.